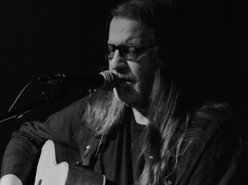 Maxwell Russell was born and raised in northwest Alabama. He grew up in the Colbert County area, a region which has had its share of music greats. It is home to Muscle Shoals Sound, Fame and other famous, groundbreaking studios. It is also the hometown of Blues legend W.C. Handy. Maxwell has been playing the guitar since he was a youngster but started his journey in the “business” at the age of 26, forming bands along the way and playing his originals at gigs. He writes music ranging from Country ballads and Country rockers to Blues and Jazz numbers and old time Rock ‘n’ Roll. His music is influenced by old school Delta music, Slide, Boogie, Shuffles, Swing and old Rock ‘n’ Roll. He plays songs by the likes of Howling Wolf, Ike Turner, Muddy Waters, Carl Perkins and newer artists like Tony Joe White and Stevie Ray Vaughan to name a few. Max has played mainly throughout the southeast for festivals and clubs. In 2006, he entered and won first place in a Blues band competition in Birmingham, Alabama and was sent to Memphis for the international competition. He has two albums of original music with his band The Shakedown Kings,one is titled One Step From The Blues and the second is due for release in 2011. A solo Delta Blues album using only his unique collection of acoustic guitars and his scorching slide work on his 1929 National resonator guitar entitled, Once It Gets In Your Bones it was released in 2010…and his album Alabama Moon which was released in 2006 features some of the Shoals finest musicians. Max is still hammering away at the clubs with his band,and playing his original at as many venues and festivals as possible…Any info needed for bookings or merchandise contact maxwellrussell256@gmail.com. Bookings for Maxwell Russell and the Shakedown Kings…message or call 256 856 1961.