Rising up from the bluffs of Memphis to the mountains of east Tennessee, through the Delta lowlands and muddy banks of Indianola, Mississippi along the way – comes the unique Southern Soul sound of Blue Mother Tupelo.

ONLY SUNSHINE – fresh, exciting and raw – is Blue Mother Tupelo’s newest album. Released in early 2014, it features 10 original songs including co-writes with the award winning and highly regarded Kim Richey, Will Kimbrough, & Ryan Tyndell. North Mississippi Hill Country, Country Soul, and raw 1970s Rock and Roll are interwoven throughout. Magnetic, familiar, and new, ONLY SUNSHINE is American music that’ll pull you in to stomp and sway. It’s an album in the truest sense and, from start to finish, meaningfully flows with life’s highs and lows.

Ricky and Micol began their musical life together as (The) Blue Mother Tupelo at an open mic night at Sassy Ann’s in Knoxville, Tennessee in the Springtime of 1995. They’d been married almost a year. That night turned into a standing Wednesday night gig for a while and over the next couple of years they were graced with the gifts of musicians of all kinds sitting in to jam until settling in as an electric four-some for some time, releasing their 1997 debut album, MY SIDE OF THE ROAD.
The pair picked up and moved to Nashville in 1998 where open mics, jam sessions and songwriter rounds prepared them for BMT’s 2001 release, DELTA LOW ~ MOUNTAIN HIGH.
Several releases followed: 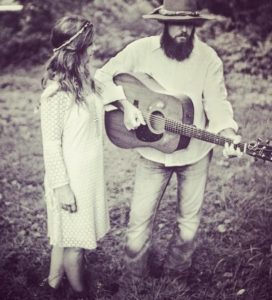 2005’s Miramax film, Daltry Calhoun, features Blue Mother Tupelo’s dreamy rendition of the Paul Anka classic “Put Your Head On My Shoulder”, as well as their signature jam of the same song;

LOVE LIVE – 5 SONGS FROM THE ROAD, showcases some live favorites recorded between 2001 and 2006 and highlights BMT’s penchant for spontaneous musical flight;
and HEAVEN & EARTH, critically and fan acclaimed, was released in 2009 and made waves across Americana & Roots Rock Radio stations worldwide. HEAVEN & EARTH debuted at #2 behind Kris Kristofferson on the EuroAmericana Chart, hit the Top 40 on Americana radio in the USA, and remained in the Top 40 of Roots Music Report’s “Roots Rock” Chart for a year.

BMT has shared shows and the stage with many wonderfully gifted and successful recording and touring artists – at theaters, festivals, juke joints, and venues of every sort. You can hear both Micol & Ricky on recordings of some of your favorite artists, too.
Currently on tour as a duo, Ricky and Micol are traveling roads across the United States bringin’ stomp and sway to music lovers lookin for somethin real, soul-filled, earthy and lifted up.